'If we have seen further, it is because we have stood on the shoulders of giants.' 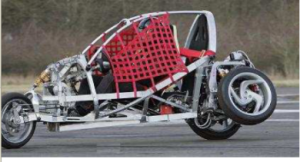 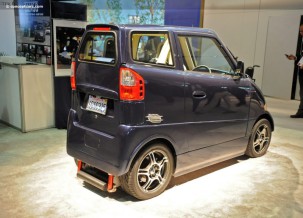 All known potential competitor products, prototypes and patents in the fully enclosed, narrow, tandem seating or tilting vehicle sector are understood to have one or more of these inherent characteristics, which may be preventing them from gaining further investment and/or general acceptance;

A. Tilting or other mechanism not failsafe in all situations.

B. Static or parking unstable.

I.  Cannot be designed to be less than 1m (40in) in width, or less than 3m (120in) in length, so are not a significant advantage over conventional autos when 'weaving' on crowded roads or when parking.

J. Cannot accomodate more than one person or are not space efficient.

N. Performance or range does not meet customer expectations for the price.

Q. Reliance on proximity of recharging points creating 'range anxiety' and parking access issues to charge from own property. If expensive recharging infrastructure was put in place, can the grid cope?

U. Have no towing capability to allow extra luggage capacity.

Z. Quantifying market desire and reluctance of manufacturers to be first in a new market.

So far only Renault Twizy has gone into mass production.

The technology offered by IPDI successfully addresses issues A-Y. It allows potential manufacturers an 'off the shelf' early stage market advantage and avoidance of fines for not meeting Euro6, Euro7 and CAFE standards.

In terms of Z, in depth market research is known.

The success of democratising step changes such as bicycles, personal computers, Walkman, telephone, smart phone, tablets and MP3 players proves that new categories can be created from the bottom up, with minimal reference to old form factors. Steve Jobs of Apple sums it up well - ''It's really hard to design products by focus groups. A lot of times, people don't know what they want until you show it to them''. An Apple ad from 1997 also states ''The people who are crazy enough to think they can change the world are the ones that do.''

Recommend this page on: